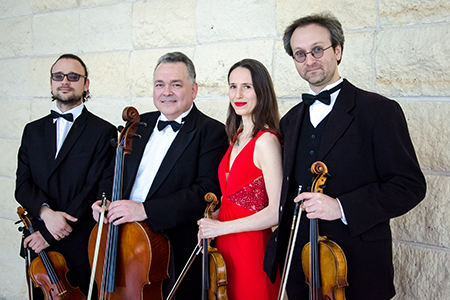 The Harrington String Quartet was established by a generous gift from the late Sybil B. Harrington to benefit the Panhandle community. From its founding in 1981, the quartet has brought “stellar credentials” and “a refined sense of ensemble and musical integrity” to performances across the nation and internationally. Highlights from past seasons include a New York debut in Carnegie’s Weill Hall, the PBS documentary A Sound Collaboration – The Harrington String Quartet, and the commission and premiere of Samuel Jones’s First String Quartet. The quartet has also enjoyed collaborations with world-renowned artists David Shifrin, Pepe Romero, James Dick, William Preucil, James Dunham, Robert Levin, Alon Goldstein, Guy Yehuda, Arthur Rowe, Ludmil Angelov, and members of the Cavani, Miró, and Pro Arte String Quartets.

For over thirty years, the quartet has delighted audiences with their finely blended sound and heart-felt interpretations of a wide spectrum of repertoire, which ranges from Bach and Purcell to Bartok and Crumb. Harrington String Quartet’s collaborative recording with the Phoenix Chorale, Northern Lights, was distinguished as iTunes’s Best Classical Vocal Album of 2012. In 2005, the quartet also released a Grammy nominated album of works by American composer Daniel McCarthy on the Albany Records label.

The Harrington String Quartet is in residence as string faculty at West Texas A&M University. Committed to both performing and teaching, the quartet regularly provides concerts, master classes, lecture-recitals and presentations for audiences of all ages, as well as collaborative projects with artists from various fields.